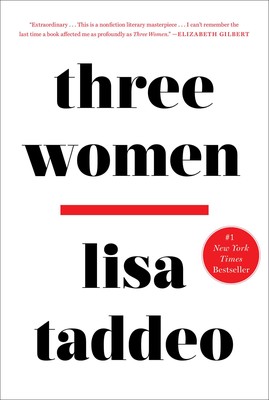 But as one reads, it becomes clear that the “who” is less important here than the “what.” The book is called Three Women, but really, these women are just the proxies for the true subject of this investigative piece: female desire. Though I can’t personally relate to many of the things these women experienced, I feel that Taddeo is able to present something universal—or, more often, something that strikes a nerve—in each story.

She starts with Maggie. This first chapter of the book is the only time that Taddeo uses the second person narration, and the effect is immediate: we are there in the room with Maggie, seventeen years old, putting on our make-up as we prepare to go on a date. “You get ready that morning like someone preparing for war. Your war paint is make-up. A neutral, smoky eye” (11). We are invited into the story. We read the details of her relationship with her married teacher, we get a glimpse of the court proceedings, and while these are the meat of Maggie’s story, they aren’t the things I was thinking about long after I put the book down. Instead, I was fascinated by the texting. There were allegedly thousands of text messages exchanged during the course of the relationship. Maggie describes the anxiety of waiting for a message, the thrill of seeing his name appear on her phone, the way she learned to interpret his tones and moods and the jokes they made, even from something as small as a strategically placed punctuation mark. I know I’m not alone in my fascination and empathy; in December 2017, the New Yorker story Cat Person went viral, largely because of the shockingly apt and blunt descriptions of the modern texting and dating culture depicted in the story. There is a line in one of Maggie’s chapters that describes it well, this feeling of waiting for that person you like to text you back, to show you that something made them think about you enough that they had to pick up their phone and tell you: “Sometimes there’s nothing better on earth than someone asking you a question” (21).

After Maggie, we meet Lina. Most of the time we spend with her in the book is during her early thirties, married with children, and about to start an affair with her high school sweetheart, Aidan. Lina’s scenes in the book are the most sexually explicit. Most of her chapters include a play-by-play of the sex that Lina and Aiden have in a hotel room, in his car, by the river, back in the hotel room. Taddeo includes a passage from Lina’s Facebook messages, completely unedited, in which Lina describes exactly what she wants Aidan to do to her:

Staring into my eyes you enter me and repeat that wonderful rhythm you did the first night: three shallow and then thrust deep, three shallow and then thrust deep, I gasp each time you come deeper into me, I whisper in your ear not to stop, you wrap your arms around me and draw me closer to you, while going faster and faster. I take my leg and arms and flip you over all while you stay deep inside me during this move. Now I am on top of you, you still hold me close to your body, kissing me passionately w/ that glorious mouth of yours 😉 (147)

Of the three women, I found Lina to be the most naked. Beyond the physicality of her sex scenes, there is a constant nakedness in the way she expresses her emotions. This is the only time in the book that we get to read something that was written by one of the women: her voice laid out on the page for us, unedited, none of her desires or typos or personality hidden. Everything that Lina feels is laid bare; nothing is too ugly or shameful to admit.  Reading her chapters, I found myself alternating between cringing that someone could be so openly desperate about a person who clearly doesn’t love her back, and then relief at the realization that I’m not the only person this has ever happened to.

And then there is Sloane. Taddeo sets her up to be the type of woman that other women are supposed to envy, or even hate: she is beautiful, thin, successful, wealthy, and most importantly, she is cool. She’s cool with the fact that her husband picks men for her to have sex with while he watches. She’s cool about her husband inviting other women into the bedroom with them. Nothing seems to ruffle Sloane. Unlike Lina, Sloane’s desire is measured, controlled, and put to strategic use. Sloane seems to understand something that Lina does not: sometimes the way to get who you want is to lean away from them, to look in the opposite direction, to create some space for them to lean in towards you.

There were two truths. The first was that she didn’t think she’d had to consider Jenny, that Wes would be making the right decisions for his partner. The second truth, perhaps truer than the first, was that two men don’t think about things as much as a woman does. Perhaps Sloane was being sexist, in a way, but she knew men could be selfish. As long as certain needs of theirs were being met, they didn’t consider the cost. (221)

Though each story is distinct, there are common threads. We see the effect that the media has on all three women: books for Maggie and Sloane, romantic comedies for Lina. The women consume this media almost obsessively, and it colors their ideas about what relationships and desire should look like. Texting and social media play a massive role as well—texting for Maggie, Facebook for Lina. The saturation of media in our everyday lives has altered what we desire from relationships, from vacations, from dinners, from our friendships—this could be an entirely different essay in itself, but Taddeo touches on it beautifully in each woman’s story.

We see the aftermath of sexual trauma in each story, though it isn’t a focus, not even in the most brutal case: Lina was gang-raped when she was in high school, but Taddeo spends only a few pages on it and then it’s never really mentioned again, which is almost more shocking than the revelation of the assault itself. Taddeo also carries the theme of motherhood throughout the book—even in the prologue and afterword—which raises several inevitable questions: do some of our desires stem from the things we saw our mothers go through, or tolerate, or yearn for? Is there any part of our desire that stems from something our mothers refused to give to us? Two of the women in these stories are mothers; what effects will their desires have on their children? How much of what we are absorbing as readers are these children absorbing in real life?

This book is about female desire in that it is about the things that three specific women want from three specific men; but it is also a book about the things that women desire from each other: approval, envy, validation. We can read each of these three stories as a set of litmus tests: our reaction to Maggie’s affair shows us how we feel about consent and placing blame. Our reaction to Lina is possibly the realest and harshest: it forces us to consider what we look like, and more importantly how we act, when our physical needs are not met and our romantic ideals are proven unattainable. Our reaction to Sloane shows us how we feel about monogamy, and more specifically, what we think a happy marriage should look like in the long run. It is clear Taddeo knows all of this, and that she knew it would be effective to present to us these three cases that are specific in their details but universal in their emotional resonance. She writes:

It’s the nuances of desire that hold the truth of who we are at our rawest moments. I set out to register the heat and sting of female want so that men and other women might more easily comprehend before they condemn. Because it’s the quotidian moments of our lives that will go on forever, that will tell us who we were, who our neighbors and our mothers were, when we were too diligent in thinking they were nothing like us.

Jackie DesForges is based in Los Angeles and currently working on her first novel. You can find her on Instagram and Twitter at @jackie__writes.
Tags: fiction, Lisa Taddeo, Three Women